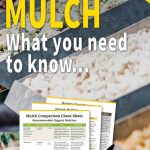 Always knowing when to
plant, prune, and harvest.

All you need is the right checklist.

Get My Checklist Now!

Inorganic Mulch: What You Need To Know

By: Cheryl Spencer
Inside: Inorganic mulch can be useful in certain situations.

Is inorganic mulch ever a better choice than organic mulch for your garden? It depends – maybe you need a mulch that doesn’t blow away in high winds, float away in heavy rains, or burn your house down.

Newsflash! All organic mulches are flammable.

But rock or stone won’t burn. So they’re the best type of mulch to use next to structures.

There are advantages to some types of inorganic mulch, y’ know, like that non-flammable thing.

If you’re wondering “what is inorganic mulch?” it’s either man-made or mined. Rubber mulch, plastic sheeting, landscape fabric, or rock mulch are types of inorganic mulch.

If you’re considering using inorganic mulch in your yard or garden, I’ve got you covered.

I’ve reviewed seven different kinds of inorganic mulches, and I tell you what I recommend and what I don’t.

This post may contain affiliate links, which means I’ll get a small commission if you make a purchase. I only link to products I use and recommend. 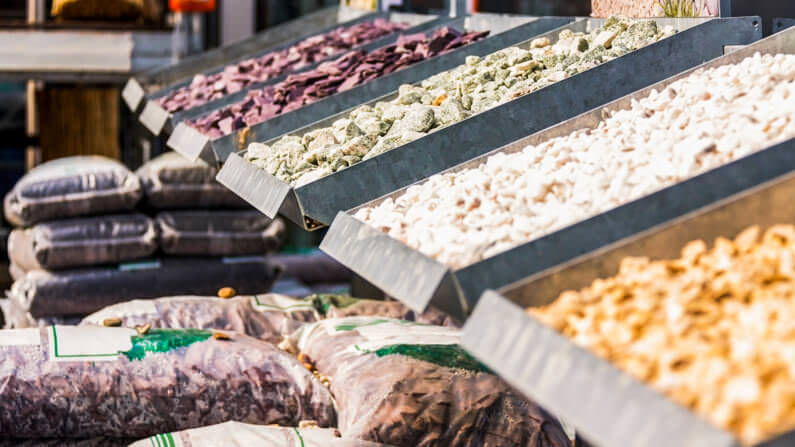 Types of Inorganic Mulch I Recommend

Rock, gravel, and stone mulches work well in certain situations, but you need to understand the downsides to rock mulches before choosing one as your mulch. Typically, the disadvantages of rock mulch outweigh the advantages.

Rock mulch is best for rock gardens, pathways, dry creek beds, beds next to buildings in fire-prone areas, landscaping around fire pits, and in trouble-spots where water collects during heavy rains and would wash other mulches away.

If you’re looking for a heavy mulch that won’t wash away, rock mulch may be what you need.

Depth: 2-4 inches, depending on the size of the rock. Apply bigger rocks more deeply.

That landscape fabric under your rock mulch is a false sense of security. Despite the claims of many manufacturers, landscape fabric isn’t a long-term solution for weed prevention, no matter what you top it off with.

Plastic mulch is best for heat-loving vegetables like tomatoes, eggplants, melons, and peppers, and warming your vegetable garden soil in the spring.

So, just say no to rubber mulch!

The Best and Worst Mulch for Your Garden | Southern Living

Why I don’t recommend lava rock or pumice:

Lava rock shares the downsides of all rock mulch, (doesn’t add organic matter to your soil, is a lot of work to install and remove, and it heats up areas around it).

But lava rock has some downsides that are particular to it.

Why I don’t recommend using red plastic mulch for tomatoes in home gardens:

Why I don’t recommend using landscape fabric under any mulch:

So, don’t buy into the myth of landscape fabric.

I cover both organic and inorganic mulch in the cheat sheet. You’ll choose the perfect mulch for your garden in three easy steps:

The chart includes details about 26 different mulches. They’re grouped by mulches that I:

Here’s a sneak peek of your printable cheat sheet: 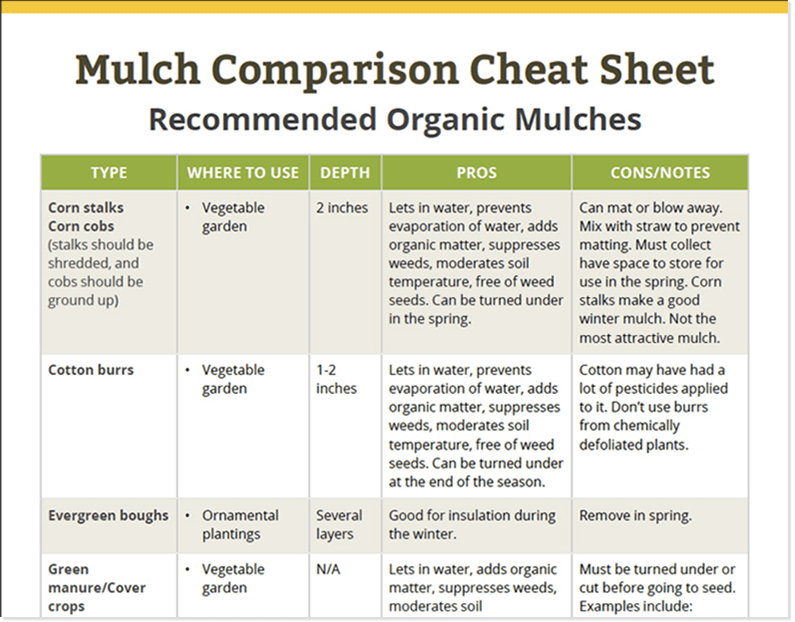 Are there any types of inorganic mulch that I missed? If so, let me know in the comments and I’ll add them to the list. 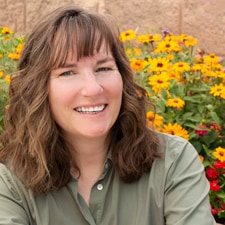 I believe you can grow your dream garden and still have time to enjoy it.

I’ll show you how easy it can be to have a garden that fits into your lifestyle, wows your neighbors, and makes your family say “more veggies, please!” 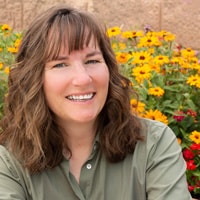 Hi, I’m Cheryl.
I’m a certified gardener, bird lover, and spreadsheet enthusiast. I believe you can grow your dream garden and still have time to enjoy it. I teach online gardening courses and write articles that help you save time and money in your garden. Join my mailing list, and as a bonus, you’ll get a helpful checklist that’ll tell you what to do in your garden right now.

1 thought on “Inorganic Mulch: What You Need To Know”